Welcome to the LOTTE Championship!

Today, the LPGA Tour is announcing updates to our schedule as we continue to navigate the global Coronavirus pandemic.

After previously announcing the postponement of our events through the ANA Inspiration and following broadened directives from the various health organizations, the LPGA Tour informed its players that three additional events on our schedule are now postponed: the LOTTE Championship in Ko Olina, Oahu, Hawaii (April 15-18), the HUGEL-AIR PREMIA LA Open in Los Angeles, Calif. (April 23-26) and the LPGA MEDIHEAL Championship in Daly City, Calif. (April 30-May 3). 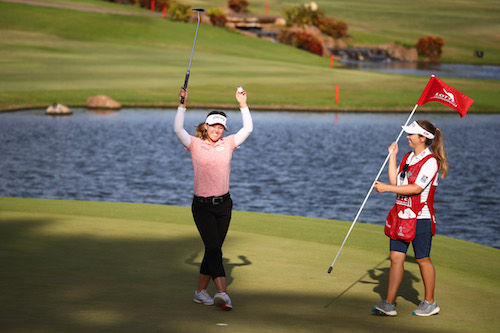 Brooke Henderson is our 2019 champion!  Her win at the 2019 LOTTE Championship was her 8th-career LPGA victory and also one for the history books as the first two-time, back-to-back champion in the tournament’s 8-years in Hawaii. She successfully defended her 2018 title and is now tied with Sandra Post’s record for most victories by a Canadian player in LPGA Tour history.

“It's really amazing to even be mentioned in the same sentence as Mike Weir, George Knudson and Sandra Post,” said Henderson. “This week was really special. I always love coming to Hawaii.”

Henderson entered the final round with a share of the lead and had a tough task ahead of her. With the top-five players all within a stroke or two, ranked within the top-20 on the Rolex Women’s World Golf Rankings, Henderson battled fierce winds and competition en route to her victory at Ko Olina Golf Club.

With a win on the weekend of a special holiday, Henderson had much to be grateful for on Saturday.  “I think patience was a huge key for us this week,” said Henderson. “I'm just so grateful to have Brittany (her sister and caddie) on the bag. Being Easter weekend, it is really special to us as well. Just so grateful to God our father and everything that he has provided for us.”

Lotte has been the title sponsor of the LOTTE Championship since the inaugural event in 2012.